He Wenbo: the iron and steel backbone of the manufacturing power has been forged by the intensive cultivation and vigorous action 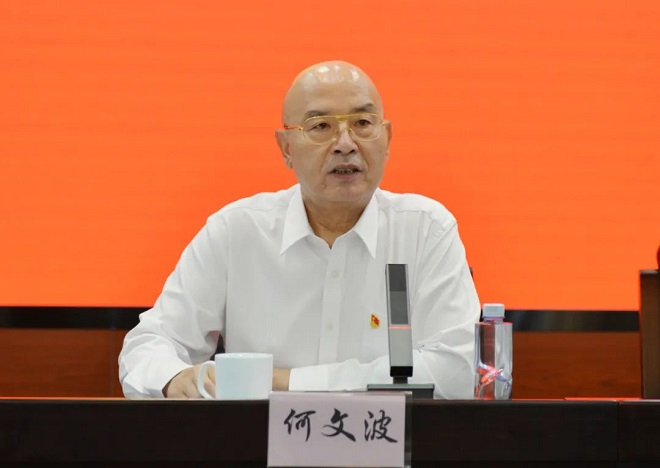 He Wenbo: the iron and steel backbone of the manufacturing power has been forged by the intensive cultivation and vigorous action Since the 18th National Congress of the Communist Party of China, my country’s iron and steel industry has adhered to the guidance of Xi Jinping Thought on Socialism with Chinese Characteristics for a New Era, resolutely implemented the relevant decisions and arrangements of the Party Central Committee and the State Council, based on the new development stage, completely, accurately and comprehensively implemented the new development concept, and built a New development pattern, actively promote supply-side structural reform, calmly respond to risks and challenges and changes in the past century, strive to complete the task of reform, development and stability, and promote structural optimization, transformation and upgrading, quality and efficiency improvement, and green development. A historic leap to a “steel power”. In the past ten years, the industrial structure of the iron and steel industry has been continuously optimized, mergers and acquisitions have been steadily advanced, the “Belt and Road” initiative has accelerated, technological innovation has continued, green and low carbon has been further promoted, the level of intelligence has been continuously upgraded, and international competitiveness has been improved in all directions. The “manufacturing power” has erected its steel backbone. In the past ten years, mergers and acquisitions have been steadily advanced, and regional integration has continued to accelerate.

Since the 18th National Congress of the Communist Party of China, the State Council and relevant departments have issued documents to promote the merger and reorganization of the iron and steel industry. The iron and steel industry resolutely implements the relevant decisions and arrangements of the Party Central Committee and the State Council, builds consensus in the industry, and intensifies efforts to advance the work. China Baowu takes the lead in setting an example and taking the lead. In 2021, the crude steel output will reach 119 million tons, ranking first in the world for two consecutive years and becoming a real steel aircraft carrier. At the same time, Anshan Iron and Steel Group reorganized Benxi Iron and Steel Group, and its output ranked third in the world; Jianlong Group became the only iron and steel enterprise in Heilongjiang through merger and reorganization; Delong Group completed the reorganization of the original Tianjin Bohai Iron and Steel Group, and Xintian Steel Group set sail; Shagang Group Integrate the former Northeast Special Steel; 9 iron and steel enterprises including Shaanxi Iron and Steel Group established the Northwest United Iron and Steel Company. Leading enterprises lead by demonstration and private enterprises become bigger and stronger. The proportion of crude steel output of the top 10 domestic steel enterprises in the country has increased from 35.9% in 2016 to 41.5% in 2021, and the concentration of the steel industry has increased significantly.

Standing at a new starting point, we will always keep in mind General Secretary Xi Jinping’s earnest expectation of “not forgetting the original intention and moving forward”, remembering General Secretary Xi Jinping’s earnest entrustment of “promoting the innovative development and green and low-carbon development of the steel industry”, focusing on “focusing on a The fundamental task—to comprehensively improve the basic capabilities of the industry and the modernization level of the industrial chain, adhere to the two major development themes—green and low-carbon development and intelligent manufacturing, and focus on solving the three major pain points of the industry—controlling capacity expansion, promoting industrial concentration, and ensuring resource security, Promoting an important process—continuously promoting the internationalization process of China’s steel industry”, we will work hard and work hard, and be a striver, doer, and dreamer who builds a strong steel country. We have the strong leadership of the CPC Central Committee with Comrade Xi Jinping as the core, the industrial advantages of “a relatively complete industrial chain, a relatively high degree of marketization, and strong technological autonomy”, and “the system has advantages, policies have space, and the market has potential.” , the industry has a foundation, the investment has a direction, and the reform has a goal”, has rich experience in dealing with various difficulties, risks and challenges, and is fully confident, determined, and has the foundation and conditions to promote the stable, healthy and high-quality development of the steel industry, in order to achieve the first Make new and greater contributions to the two centenary goals and the realization of the Chinese dream of the great rejuvenation of the Chinese nation, and welcome the victory of the Party’s 20th National Congress with outstanding results!